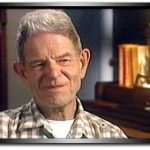 The child of famous sociologists, Staughton did pioneering work in history before being blacklisted after organizing antiwar protests (including at Spelman College, where he taught), helping organize Freedom Summer in 1964, and being arrested for his role in protests against the Vietnam War.

“Even as he developed a following as an agitator, he built a reputation as a pathbreaking historian,” his New York Times obituary notes.” His best-known book, The Intellectual Origins of American Radicalism (1968), opened new ground by identifying members of the Revolutionary War generation who embraced abolition and equality, and it won praise even from establishment historians.” Nonetheless, he was fired from Yale University, where he was then teaching, and while invited to speak at history conferences decades later, never again held a faculty position.

Lynd then worked organizing in factories in Illinois and Indiana and secured a law degree. He and his wife, Alice (also a lifelong activist), moved to Youngstown, Ohio, where they worked with steelworkers fighting the closure of the steel mills and campaigning to reopen them under workers’ control. Over the decades that followed, they offered legal assistance to people who could not afford lawyers, wrote several books (on labor law, rank-and-file labor organizing, prison reform, and struggles to build a new society), continued to assist workers struggling for control of their unions and rights on the job, and waged a long legal battle in behalf of prisoners being prosecuted for their role in a prison rebellion.

While not a syndicalist (Staughton was a libertarian Marxist, rejecting vanguardism out of his commitment that workers must lead their own emancipation, and were fully capable of doing so), Staughton spoke at IWW conventions and conferences in the early 2000s in support of the union’s efforts to refocus and revive its workplace organizing through a solidarity unionism model. He liked to awaken guests at his home with a rousing rendition of “The Internationale” – appropriately followed by a hearty breakfast.

Staughton is survived by his wife, Alice. Together, they lived full lives, always fighting on the side of the oppressed.

ASR offers discounted copies of some of their books on our recently reactivated (though still under reconstruction) online store:

From Here to There: The Staughton Lynd Reader

The New Rank and File (oral histories with labor activists)

Labor Law for the Rank & Filer