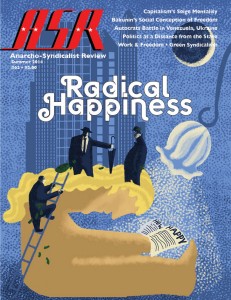 ARTICLES: Ukraine, Odessa, Anarchism in the context of civil war  by Antti Rautiainen

The making of an anarchist bookfair by Jay Kerr & Sid Parissi

Bakunin Bicentennary: An injury to one is an injury to all: Mikhail Bakunin’s social conception of freedom  by Harald Beyer-Arnesen

Bakunin: Count on No One But Yourselves!

Politics at a distance from the State: Speech to South African Movements   by Lucien van der Walt

What really was the “Real Socialism” of the Soviet Union? Review by Wayne Price